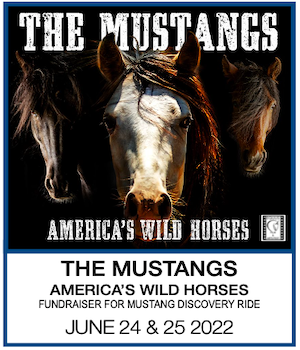 The Mustangs: America’s Wild Horses is a fascinating and colorful story about the wild Mustangs in America—their history, their current status and their future.

This breathtaking documentary produced by Robert Redford, Patti Scialfa Springsteen and Jessica Springsteen tells the story of America’s wild horses. From their turbulent history to their uncertain future, from car ads to high school mascots, the mustang is the enduring icon of America. But in modern times it has become entangled in controversy and bureaucracy, and now its future is in question.

The feature-length documentary takes audiences on an odyssey throughout America to places that few people have seen, with more than 80,000 wild horses on public lands and more than 50,000 in government corrals.

Preceding this film will be the short documentary, Mustang Discovery Ride. The goal of the ride is to cover 5,000 miles across the country while inspiring the adoption of 5,000 Mustangs into appropriate homes.